You are the Word of God to a wounded world. 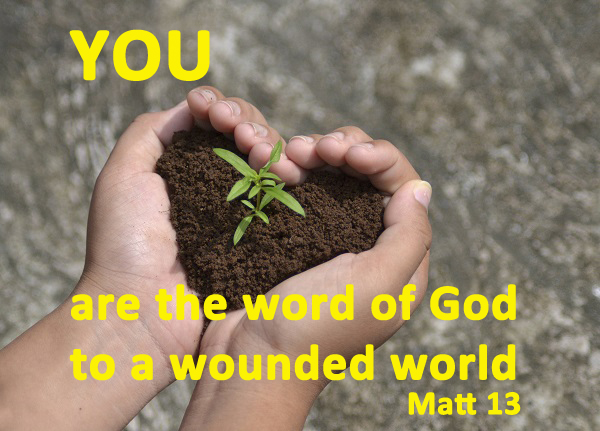 So I’ve been re-reading Matthew’s gospel recently, and was blown away by what I noticed this last time.

In that story the soil is our hearts, and the seed is the Word of God. Pretty straight-forward.

After explaining the story, though, he goes on to tell another – and this one is about how a farmer sows wheat and his enemy sows weeds amongst the wheat. The farm workers offer to pull out the weeds, and the farmer says, “No, if you do you’ll damage the wheat. Wait till the harvest, and then we’ll burn the weeds and harvest the grain at the same time.” Which is a good word to those of us who want to do God’s work of judgement right now – we usually do more harm than good when we try to separate wheat from weeds.

But what really struck me about this is that in this second story Jesus says that the seed he sows is “the children of the Kingdom.” That’s you and me, sisters and brothers. Jesus sows us into the world to grow and bear fruit.

I’m used to thinking of the seed that is sown as being the Word of God. That picture of Jesus casting grain all over and letting it fall where it will, knowing that though some won’t grow, some will fall on good soil and bear fruit. As a teacher of the word of God, that was an image that resonated well with me. I like to think I’m following in my master’s footsteps and scattering seeds of the kingdom that may or may not grow and bear fruit.

But the image of seed in the second story is so different. In the second story I’m not just scattering words around me carelessly, I am the word that is sown. It’s my job to grow in whatever soil I’m planted and to bear fruit – despite the weeds that might be growing alongside. And that gives me pause for thought. If I’m the word of God to the world, what does that look like? In the first picture, the word is something different to me – it’s something I spread or deliver. It’s the difference between the message and the messenger, the postie and the letter. I don’t usually judge my mail by what my local mail carrier looks like, and yet that’s the situation we have here. The one who carries the message is the message. In some ways I don’t like this. I like to be a bit detached. I like to think I can say one thing and do another. But it looks like God isn’t keen on that. He might even call it something like hypocrisy.

The apostle Paul was onto it; he wrote to the church of Corinth “…you are a letter from Christ…” (2 Cor. 3:3). It’s not just what we say or the message we deliver that matters; it’s us. How we live. How we let the gospel shape our lives into paths of compassion, healing, mercy, and righteousness. How we let the Spirit mold us to be like Jesus. In all our relationships, that should be the most obvious thing about us; that we are being remade in His image. Is that true for me?

It was true for Jesus. While he talked about sowing ‘the word of the Kingdom’ in that first story of the wheat-seed, his dear friend John later wrote, “The Word became flesh, and dwelt among us.”

That’s the path we are on. We aren’t allowed to just say words and let them fall where they will. We are to be that Word in the flesh. To fall into soil of all sorts, and to bear whatever fruit we can where we are planted. Not just saying the word but being the Word of God for those who would otherwise know only the rocks and the weeds.

This entry was posted on March 31, 2019, 4:38 pm and is filed under Following Jesus, Theology. You can follow any responses to this entry through RSS 2.0. You can leave a response, or trackback from your own site.